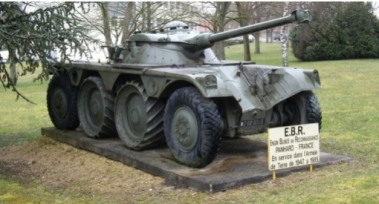 I have this passion, one of several to be sure, for French tanks. It comes from liking French aeroplanes and having a sneaking fondness for tanks in general, and also a liking for the simplicity of making tank models – they’re basically metal boxes on wheels or tracks, in 1/72 anyhow.

So I started off making the usual and readily available French tank models and thinking that there wouldn’t be many of them to make a complete collection. I have now made models of 38 French AFVs with another five in the queue waiting to be made, and there are a lot more than that if only I can find the kits for them.

Talking of finding kits to make, that was the hardest part of this project. There are some web sites that sell kits of tanks, obscure and otherwise, and I can spend pleasant hours trawling through lists of kits, finding obscure web sites in hidden corners of Eastern Europe in the hope of finding yet another of these obscure and rare kits.

There is this mob called Tracks and Troops that apparently has a physical reality somewhere in the Czech Republic. It has lots of potential to occupy a few hours. Because of the way their data base is set up you have to look at over three thousand entries to find the handful of French tanks lurking there. This can fill in a few interesting hours.

Perhaps a year and a half ago I indulged myself in this passion and came up with five interesting French tanks and armoured cars that I wanted. So I ordered them, filled in the appropriate fields, pressed the order button and then raced to my mail box every day in the expectation of their arrival. The expectation wore off after about three months and, after nine months of waiting, I’d more or less given up.

Then, an email that looked like junk mail arrived in my email inbox. Thinking it was junk I was about to delete it, but then I looked again and saw that it had come from Tracks and Troops. The upshot of this email was that they finally had all the kits I had ordered and if I were to pay for them they would send them to me. This I duly did, and started haunting my mail box again until, not too much later, they arrived. This Panhard EBR was one of them.

There’s not much to write about in this kit. It makes up into one of those odd looking French AFVs, this time particularly odd because it has two fronts, not a front and a back as you usually find on vehicles, and the middle wheels lift up off the ground. Who else but the French would think of something like that? 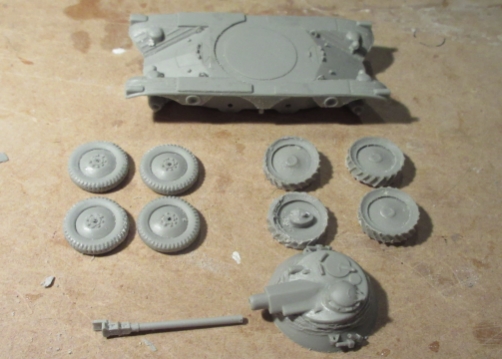 There aren’t many parts in this kit and they aren’t hard to put together. The only fiddly bit is in drilling out the gun barrel and opening up the muzzle brake.

The hull is moulded in one part, a very nice piece of work too. All you have to do is glue the gun barrel to the turret, glue the wheels to the hull and glue the turret to the hull. And that’s it.

As for colours, the instruction sheet has nothing to say on the subject and photographs of EBRs in action are black and white and colour photos are of museum examples.

They’re all green, but different shades of green. I resolved this conundrum by picking the same shade of green that I’d painted an ARL 44 in a couple of months back.

To add a tiny touch reality to the model I added a couple of French military number plates that apparently go on trucks, but who can read the numbers in that scale.

So if you want a nice little kit that takes no work to assemble, this is the one for you. If you are interested, that is, and if you can find it in the first place.

This site uses Akismet to reduce spam. Learn how your comment data is processed.