Mark Pilbeam, our Club President, sent the following email (today) to all club members but wanted to make sure that the information in the email was available for all who subscribe to this website and Facebook group page.

Sean has just found out that the ELC is now closed indefinitely as a precaution against COVID-19 transmission.  ELC will review the situation on April 13. This means no venue is available for our next meeting or any subsequent meetings until the pandemic subsides and the ELC can safely be re-opened. We will be informed of developments. I guess this means we will have to self-isolate in our sheds until further notice.

Below is a scan of the notification sent (as a PDF) to the club and other organisations served by the Eastwood Leisure Centre: 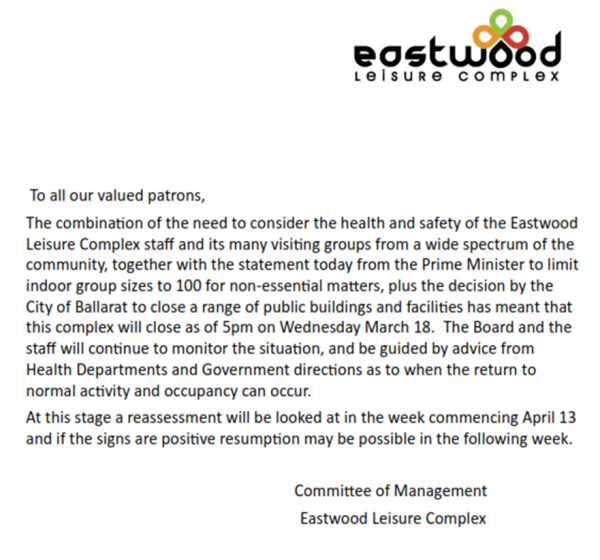 For the moment we’ll need to become an online club (as will many others in the same situation).

To assist in continuing the caring and sharing If:

THe MoB newsletter for March has been uploaded and is now available for download. Use the menus to get the PDF download.

Thanks to the many people who’ve asked about the club’s Model Show and Buy, Swap and Sell event for 2020. Due the current COVID-19 epidemic and the likelihood of greater restrictions on events we have decided to hold the show until later in the year.

Mark Pilbeam, MoB Club President said today: “I’ve had a lot of feedback about the show and the consensus is that we postpone in view of the COVID-19 epidemic. Many modellers will not risk attending so let’s see if it can be staged a bit later when the panic is over.”

For the moment, we’ll be working with our partners at the Eastwood Leisure Centre, and vendors to stage the show once the COVID-19 epidemic has passed. As soon as we have more information on a future date we’ll post it here and on the Facebook group.

It is a new year, and the first MoB meeting is on this Saturday 3rd February 2018. Hard to believe that one twelfth of the new year is gone.

I’ve been very committed to work and have had little time to do updates to the site (my bad).

However, today I uploaded the last of the 2017 newsletters, and the first 2018 newsletter. Additionally I’m in the process of updating the annual show information for the upcoming April show. So keep an eye out for that too.

All the best and I’ll see you at the club meeting tomorrow night.

You guessed it, that time of the month again. Time for a MoBster meeting at the new location, Eastwood Centre in Ballarat Central.

So, unless you’ve lived under a rock for the last few weeks, or otherwise been in the modelling boondocks, you’ll have noticed that there is a modelling show this coming Sunday in Ballarat.

Before we get there though there’s the chance to come and hang out at the club’s new meeting rooms at the Eastwood Centre (right behind Woolies and Coles on Dana Street).

Plenty of parking, warmth, tea and coffee, friendship and a fresh and raring to go committee. So come along and hang out with your fellow modellers for the evening. Meeting starts at around 7.30-ish, runs for some time and there’ll be lots of talk, and fun.

Just a reminder that the club meeting has moved. So if you head over to the Kohinoor Centre on Saturday, and wonder why the lights are off, and the place is really quiet, don’t say I didn’t warn you.

See you there on Saturday.

Out of space, and no one can hear you scream

It’s been a wild ride for the members of the club the last few months. Our meeting home for some time, The Kohinoor Centre, is to be closed. Costs to host a show ballooned and we’ve been forced to delay our show while we put things together. It just seems that we could not find the luck.

And then everything changed.

Beginning next month (June 2017) we’ll be moving to a new space, in the centre of Ballarat, easy to get to, lots of parking and plenty of space. As Gary Zimmer our President said today in a statement from his house: “In case you didn’t already know, we are no longer meeting at the Kohinoor. The June MoB meeting, and those for the foreseeable future, will be at the Eastwood leisure centre, 20 Eastwood St. Times are unchanged, still 7-ish on the first Saturday of the month, except January.”

So there you have it. Our accommodation woes have passed. A new chapter has begun for the club. The club’s thanks go out to both Dom and Gary for the work they’ve put in to find us a new home.

Posted by Andrew Martin on May 11, 2017 in Club, Monthly Meeting, News, Updates

It’s the first Saturday of the month and that means that it’s time to gather your thoughts and part built kits and head on over to the Kohinoor Community Centre at the cnr Sebastopol Street and Errard Street. Start time is about 7:30 pm, finish time is when you are the only one left.

See you on Saturday.

Site updates and an issue with Google Maps 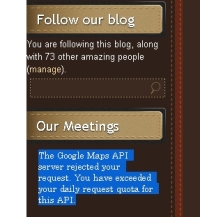 I’ve noticed, over the last couple of days, some issues with our map that should be appearing on the sidebar of the MoB site. You can see that at left in Image 1. Beware Technical Content – My research puts the issue squarely on using the WordPress hosting service. Because we are sharing access to Google along with other users hosted on the same server, occasionally we may lose access because other sites (as well as us) will exceed Google’s per day access limits. There is not much that the MoB technical team can do about this at the moment – at least not directly. To work around the issue however, we’ll be putting in place a static map on the About page over the next couple of days. In the meantime bear with us while we put this work around in place.

I’ve updated the About page today (03/08/2016) to reflect the current club office bearers. Updates of office bearers occur with publication of the August newsletter each year.

Posted by Andrew Martin on August 3, 2016 in Club, Site, Updates